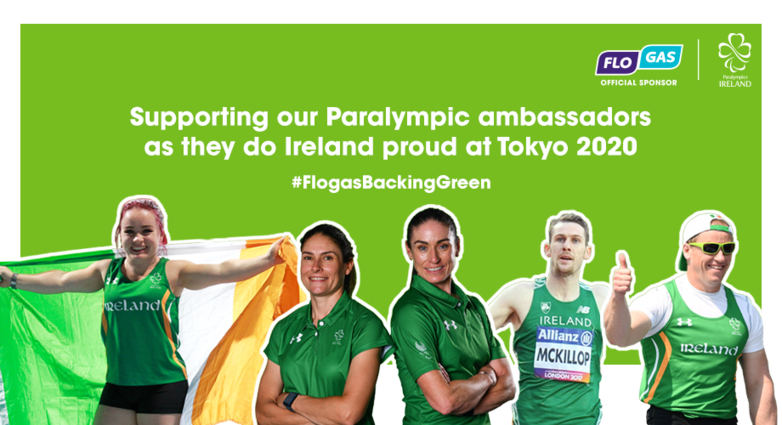 Flogas is also an official sponsor of Paralympics Ireland and John Rooney, managing director, Flogas Ireland, said “We’re delighted and proud to be once again involved with Paralympics Ireland. Our sponsorship programme aims to make a positive difference by supporting our athletes who are competing at the highest levels of their sport. We wish our Brand Ambassadors, Michael, Katie-George, Eve, Patrick, Niamh, and all of Team Ireland the very best for Tokyo 2020 and look forward to seeing them in action!”

Runner Michael McKillop is considered one of the greatest Paralympians of all time, representing Ireland at three Paralympic Games and winning four gold medals in the process. He said, ‘With only a short time to go until my 1500m final, I believe that I have what it takes to step back onto the podium again after missing out at the 2019 World Champs.”

Rio 2016 gold and silver medallists, cyclists Katie George Dunlevy and Eve McCrystal are expected to compete in the 1000m Time Trial, 3000m individual pursuit on the track and in the Time Trial and Road Race at Tokyo 2020. They said ‘We’re so looking forward to representing our country again and very proud to be Flogas brand ambassadors. Thanks to everyone who has supported us along the way.”

Considered one of the finest Paralympian discus throwers in the world, Cork born Niamh McCarthy began competing in 2013, winning Olympic, European and World Championship medals along the way. Niamh said, "The road to Tokyo has taken a lot of hard work and determination but it is an exciting challenge that I’ll be giving my all to.”

Patrick O’Leary was the first Irish para-canoeist to represent his country at Rio 2016, Patrick was also Ireland's first ever Paracanoe European champion in 2021 and placed fifth in the 2019 World Championships. Patrick will be competing in the 200m Sprint in his class at Tokyo 2020 and he said, “I am delighted to qualify for my second Games and aim to perform my best in Tokyo, at the end of the day that’s what elite sport is about, doing everything you can to perform to your absolute best.”

Flogas Ireland, a DCC Business, is a leading supplier of liquefied petroleum gas (LPG), natural gas and electricity on the island of Ireland, servicing a diverse range of sectors and applications including the industrial, commercial, domestic, catering, agricultural and automotive markets.

We want to ensure you are seeing the right content for your region as offers or content may differ for different regions. Please choose your region below: