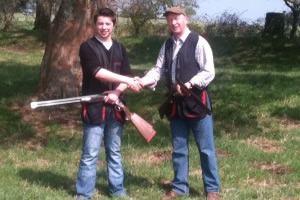 from left) Champion clay pigeon shooter Davy Benson junior of Coolcotts, Wexford with Richard Martin, managing director of Flogas Ireland at the announcement that the company will be sponsoring him for the coming year.

19 year old Davy is one of Ireland’s top junior clay pigeon shooters and a member of the Newbay GPA Shooting Team as well as the Wexford County Shooting Team.

Richard Martin said, “It is very positive to see a young man of Davy’s talents take such a keen interest in developing his sporting career. We are happy to support him in his endeavours and wish him well for the future.”

Davy Benson also commented, “I am delighted with the sponsorship from Flogas. Previous years have proven to be quite successful for me and I hope to be able to advance further and achieve my goal to become the Irish Open Champion or the Junior High Gun at the Home International Sporting competition later on this year.”